Open letter to Leonard Pitts, Jr. — What Took Us So Long

I’m a fan of Leonard’s columns, and in this one he celebrates the large numbers of women running for state and national offices. And he includes the statement, “One also wonders what took them so long.”  That same day, I wrote an honest, respectful reply, shared it on Twitter, and heard nothing in response.  One doesn’t really expect busy columnists to read all the replies to their work, but I had had hoped this time would be different. But no, women’s voices still don’t seem to matter when the discourse is about women’s experience.

This is what I wrote:

I can’t speak for all sisters, but let me just womansplain this to you from the perspective of a historian who’s been navigating her way through the patriarchy for nearly six decades.

Though you champion women in your column, your question makes it sound like it’s an easy thing, shrugging off the yoke of a deeply entrenched, world-wide, eons-old patriarchy, enforced with physical punishment. Surely you, of all people, have not forgotten that women won the right to vote in the USA in 1920. For women to rise in a mere hundred years as a tidal flood, aspiring in large numbers to occupy the halls of state and national power, seems to me a sea change when you consider how long the outgoing pattern has been entrenched. I challenge you to honestly claim that we could have done this any faster without a lot more chaos in the world, and chaos is one of the forces women tend to struggle against. This tide has risen as it must, in every way it can, through the cracks in patriarchal systems.

You wonder why it took so long? Because the work women do to overturn toxic social systems is largely invisible to many men, just like a lot of the work we do in the world: for example, the subtle work of private influence, the emotional work of nurturing family, and processing all of the emotions except anger. (Patriarchy damages us all by isolating anger as the acceptable “male” emotion, and we pay the price in endless wars.)

What took us so long? We were busy working for no pay, or in underpaid jobs at wages a fraction of what was paid men. We were breaking glass ceilings in homes, and schools, and businesses. We were raising a generation of citizens who could fuel this political tide and help us be woke. We were grabbing opportunities to advocate for our own and others’ children, cooking meals for those who grieved or were ill, serving on committees, and organizing communities of support around schools and churches and neighborhoods to pick up the pieces when official government agencies weren’t adequate to the task.

We’ve been doing the lion’s share of the housework for a long time and even before men began pitching in on that, we took on other tasks, like earning money, creating art, and volunteering our service in a thousand different ways. The tidal wave of women entering politics shows that we are pissed off enough at how badly men have screwed up and screwed us over that we will even take on the official task of governing, one that still-entrenched sexism makes triply harder for women than men.

We are seeing this as the first historical moment in this country when we might stand a chance of washing away the toxic stink that masculine greed has made of our nation’s seat of power. What took us so long? We’ve never had large numbers of men on our side like we do now, due to the shadow side of patriarchy playing large on the national stage. We know that if we’re going to build something more equitable out of the trash heap of patriarchy, we women will need the participation of good and thoughtful men. I think the ignition was last year’s Women’s March, when we saw women and men all over the world marching for the things we women have always worked for—peace, equality, love, and getting our voices heard. The march gave us the fortitude to face down the system once again.

Be careful with your question, for it can be read as a belittlement of the bravery of the women stepping up to endure grueling campaigns and the ugly backlash from some ugly men in the halls of power. We needed strength from images of people on every continent gathering (even where public gathering is forbidden) to stand on the side of decency and peace. Social media’s instant transmission of photos and videos from the Women’s March gave us tangible emotional support of the kind that we haven’t historically had from men, because emotional support was by and large women’s work.

Do not ask what took us so long. Instead, recognize that sisters have been doing it for us all since always, in ways men haven’t even noticed.

You may also enjoy these: 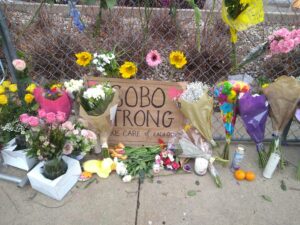 After the terrible events of Monday, March 22, 2021, I had to write about my neighborhood store. You can read the piece in The Daily